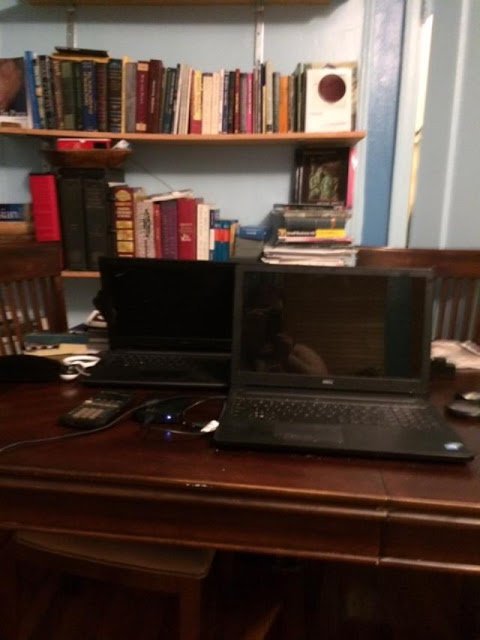 5:00 am: I love it when I wake up early in the morning; this time seems more mine than any other. I weigh myself—the scale hasn’t moved but I am patient. I am obese, but less so by some 30 pounds now, and every day is a new adventure. This week I broke out of my couch-to -computer life to walk in the park and along Broadway for several miles. I am abstaining from my binge foods, sugar and flour, and every day I bend and turn my big body in joyful remembrance of motion. I am coming out of food fog and experiencing the pink cloud of addictive withdrawal.

Next, I do what I have always done – check my analytics. Did someone look at my blog? My Wikipedia page? My Facebook? My Twitter? Did something pending get published? Like Roland Barthes, who once wrote to me (yes, truly) J'écris pour être aimé de loin, I also write to be loved from afar, and to be read.

5:30, thereabouts:  I meditate on positive affirmations as I have done for years. Mixed in there are my literary ambitions—I visualize reading at the 92nd Street Y, of being published in The Paris Review.  I also remember David Foster Wallace who had every award and pub I could ever covet and who killed himself, and I affirm for less glittering but more durable qualities like gratitude, joy, humility, and love.

7:00 am: My poetry partner likes my new poem, “Over 35.” It is an interleaving of Shakespeare’s Sonnet XXXV with answering lines about infidelity. This is a gut poem; it proceeded from an ache in my body that could not be denied. Lying on the couch, I asked, “Can I write this later?” No, my gut replied, now. I decide I will send it to Poetry;  I have received my last rejection and it is time again. I bundle my Submittable, write my cover letter with my too-long bio, and send. It is done; I can forget about it for another six months.

9:00 am: What has Trump done now? I watch the news addictively. A child of parents persecuted by Stalin and interned in concentration camps by Hitler, I see the rise of fascism in the United States, of shameless, Goebbels-style propaganda – make the lie big, keep it simple enough for your stupidest follower, repeat it often, get others to repeat it. Sinclair has eaten Tribune and tells people on local news between the sports and the weather that Obama was funded by Hamas . . . this is the time writers earn their keep, as Toni Morrison said, these are the times we go to work.

11:00 am: My side hustle – I am a freelancer, write, ghost, do social media, edit, whatever I can to support my literary jones.  For the past year, I have gotten work as a terminologist, a creative namer for advertising—I come up with names like Xarelto and Aviator for products, organizations, and services. This is one corporate gig where being a poet is not cause to be thrown out of the interviewer’s office—creativity with language is prized and paid astonishingly well. Today, I name a banking data platform; they want names that connote reliability, innovation, flexibility, data science. I knock out 100 names according to their parameters, real words lightly coined, and feel gratitude for the easy money.

3:00 pm: My current project is a screenplay adaptation of my autobiographical hard-knocks novel, Patient Women. I am becoming acutely aware that I know very little about this genre, but for now, am trying to get the recovery from alcoholism, bipolar disorder, sex addiction and second-generation Holocaust survival all into 110 loosely packed pages in something that resembles the conventional format of a writing discipline that values conventional structures. To my surprise, I am succeeding and have gotten the war story all in with plenty of room for the recovery, although several chapters, characters, and subplots have had to be jettisoned or conflated. I am halfway through the roughest of rough drafts, and know I will have to go back to set up each shot visually, not verbally, and to edit mercilessly. How the hell am I going to sell this? I haven’t the foggiest; I am banking on, if I write it, the agent will come.

Evening. I didn’t procrastinate or binge today, a good day. More news, friends, sleep at a decent hour. Something to do, to look forward to; work and love, Freud said. It is a good life and I, woman of a thousand diagnoses, do not take a second of it for granted.

Larissa Shmailo is a poet, novelist, translator, editor, curator, and critic. Her new novel is Sly Bang; her first novel is Patient Women. Her poetry collections are Medusa’s Country, #specialcharacters, In Paran, A Cure for Suicide, and Fib Sequence. Her poetry albums are The No-Net World and Exorcism, for which she won the New Century Best Spoken Word Album award. Shmailo is the original English-language translator of the first Futurist opera Victory Over the Sun by Alexei Kruchenych, performed at the Los Angeles County Museum of Art, the Garage Museum of Moscow, the Brooklyn Academy of Music, and theaters and universities worldwide. Shmailo also edited the online anthologies Twenty-first Century Russian Poetry and From Pushkin to Pussy Riot: Russian Political Poetry and Prose. Her work is included in the libraries of Harvard, Stanford, Yale, Princeton, the Museum of Modern Art, and the Smithsonian. Please see more about Shmailo at www.larissashmailo.com