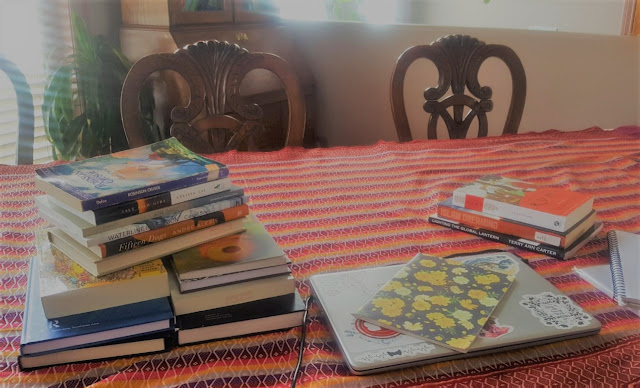 The recipe for my typical writing day is usually not a writing day at all. My process is rather an essential and sporadic mix between intensive research through different venues, continual reading and inspiration. There are times when the inspiration is purely through my own hard brain-sweat. Then there are times where I’ve literally woken up to semiconscious lines in my head that I scramble to write down before their inevitable disintegration in waking moments. I now keep a pen and notepad by my nightstand. This pad more often than not ends up in my creative workspace during hours of concoction.

I see humans as inspired creatures. This process in particular humbles me as it allows me to understand that not everything really comes from myself. Sometimes, I see it as whispers from my ancestors. Perhaps there’s a level of madness to it… but it cauterizes my dissected body in some measure.

Despite my tendency for sporadicity, as a creative writer and poet with an inclination towards competence, I do believe it necessary to have structure and I tend to juggle between two main projects at a time. As of right now, I’m currently editing my poetry collection manuscript, Citizenship in Water and philosophizing two potential chapbooks. One titled, a conversation with mad tiger and another as of yet untitled. Reality tends to keep me tethered to other obligations such as work, social life and family. I’ve found the general goal of crafting one poem per week to be realistic. This allows each poem room to simmer in the ingredients of mutability. Consuming marinated words can be quite delightful.

As a multigenerational mixed-race person of Trinidadian-Indian/Indonesian heritage, my work is influenced by tracking and linking my lived experiences, shared tribal/spiritual/religious traditions, and familial stories to ethnographic discourse, political activism and topographical landscapes in the Caribbean, Asia and North America. It’s a rigorous exercise which includes research that spans: conversing with family, reading scientific and historical research, discerning photos and records, studying linguistics and regional literary practices, reading authors of those literary histories, and tracing the changing borders of nations and movement of bodies through different time periods.

Such deep dives are simultaneously exhilarating yet draining. And I find the more I go on, the more books and materials I find piled high on my desk. The newest addition being Harvey Neptune’s Caliban and the Yankees: Trinidad and the United States Occupation. Some research takes weeks at a time although I’m not quite sure if some of my inquiries ever really leave my workspace at all.

Lately, I’ve been looking at national archives of British voyage maps which chart Nourse Line ships sailing from the Indian Empire to the West Indies. These travels would consist of stopping by ports in Africa and would be around four months long. High cases of mortality rates and diseases like cholera, typhoid, dysentery and measles were quite common.

It’s unnerving. Thinking of my great-grandfather in such conditions…

In many ways my writing is as much for myself, as it is for my readers. As Dionne Brand once said, “To live at the Door of No Return is to live self-consciously. To be aware of your presence as a presence outside yourself. And to have ‘others’ constantly remark on your presence as outside of itself. If to think is to exist, then we exist doubly. An ordinary conversation is never an ordinary conversation.”

There seems to be a suggestion that with the active inclusion of diverse voices that literary magazines are suddenly devoid of meritocracy. I try to ignore such claims as I continue my line of research and writing. I know for a fact the amount of effort it takes to write the type of stories I want to write and that’s enough for me.

When I do in fact start my writing, I find I am most productive in the early hours of the morning or really late hours of the night when there is no one to distract me. A cup of coffee in tow.

Sometimes the bustle of my autistic brother, Deen pulls me away from my work. Occasionally he’ll sit with me in the quiet. He’s non-vocal insofar as the only noises he can produce are vowel sounds such as aaaa, oooo, or his favorite eeee.

I often wonder what his voice would sound like if he could produce sentences. Or how he feels about having a sister who loves words so much. Perhaps it’s just me, but there’s a gentle glimmer in his eyes whenever I talk to him while I write. From time to time he’ll use sign language to signify a thank you after giving him a cup of coffee and that in itself reminds me that he too has his own voice, however small his sign vocabulary. Hello, thank you, more, and I love you. Such an interesting cache of words to comprehend.

Language it truly all around me. Alphanumeric, visual or otherwise.

Words blur together in my career as well, which includes technical writing and communications. I try to keep both sides (creative and technical) distinct from one another. I’ve been rather successful, though I know the fact remains impossible. One cannot simply be a writer and turn off that switch.

And so my inspiration for writing continues. You’d think that I’d be sick of it.

Maryam Gowralli holds a degree in English Literature with Distinction from the University of Calgary. She was an editor for The Quill Magazine and NōD Magazine, and is currently a blog content writer for Augur Magazine. Her poetry collection Citizenship in Water is forthcoming with That Painted Horse Press in 2021.