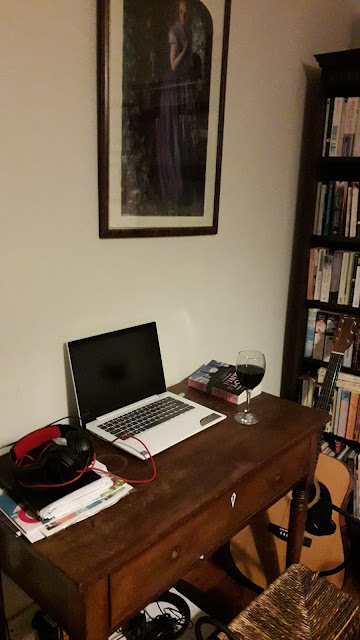 I would love to have a writing shed like Roald Dahl’s, or a writing hut like Dylan Thomas’. Even more than that, I would love to have a writing routine, as this would mean that writing is my job and I would be ‘a writer’. But I’m not. I’m a dreamer – I have three jobs, two children, a cat, and many, many dreams about writing. Sometimes I manage to do some writing, like this piece I’m writing now. But it’s taken me three cups of coffee and several deep house tracks to get to this stage, and this is very typical preparation for me. YouTube is a fantastic, distracting juke box. Without it, I wouldn’t have discovered gorgeous music by the likes of Ben Böhmer, Marc Brauner, and Nox Vahn & Marsh. If you type in ‘Houseum’ you will be taken to a wonderful library of sound and you will spend hours there, like I have done. I also spend far too much time reading YouTube comments. Very occasionally I will read a comment that is genuinely interesting.

I say I’m ‘a poet’ but I think I’ve written about five poems this year. The last poem I wrote wasn’t at my desk in my house: it was on the train from Worcester Foregate Street to Smethwick Galton Bridge. It was called ‘Last Christmas’ and it was for an anti-slam. I didn’t win the prize and I still don’t know if this was because my poem was dreadful or too good. That said, I’m unusually indifferent about the reaction that night, as I was just grateful to enjoy what would have been an otherwise grim train journey. My attention was taken away from the grey, wet, cold November morning, and instead I was marvelling at my ability to include references to Wham and Fleetwood Mac in a poem about a fart that caused a family breakdown on Christmas Day.

I have got into the habit of telling people that ‘I’m writing a book’, though I wish I had a habit of actually writing the book. For a few weeks, I achieved a level of discipline, whereby I set the alarm for 6am and wrote/procrastinated for about an hour before sorting breakfast out for the kids. Now I just try to grab an hour whenever I can. I started the book in August and I’ve averaged about 10,000 words a month, which is much slower than I would like, but it’s the biggest piece of writing I’ve done since I was 9 years old (I’m almost 38). I used to dismiss the idea that I could sustain the effort needed to write a book. I also like the fact that a poem can be written in a few seconds on a receipt or the back of a hand (preferably your own hand, as experience tells me). But now I can’t dismiss the idea that is constantly rattling around in my mind and which requires approximately 90,000 words to be added to a Word document so that one day I will be able to move on to something else. Possibly another book or another sequence of daft poems or a pop song or a horror sequel.

In the photo of ‘the study’, you can see two sets of headphones, a guitar, and a book about Pink Floyd. These items have not been artfully placed, believe it or not. Nor is the glass of red there to give the impression of decadence. I love writing but music is the supreme art form, and I drink a lot of wine. In another life, I’d be a Belgian DJ with a brilliant pseudonym composing ethereal masterpieces on a laptop in a bedroom. Oh, and whilst completely sober: wine and writing don’t mix. On that note, I’m going to make a fourth cup of coffee… 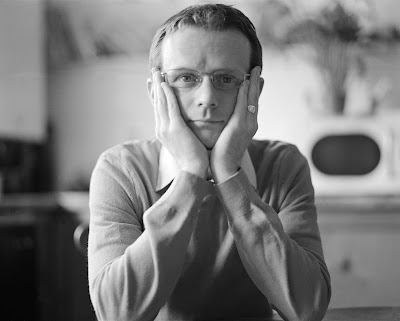 Neil Laurenson is a poet in Worcester, England. His debut book Exclamation Marx! was published by Silhouette Press. He occasionally shares his poems in sparsely populated venues in exchange for sporadic applause. He used to dress up as Tony Blair in the local high street almost every Saturday for five years, in protest not in tribute. He made a short horror film earlier this year called Teddy Scare, which also involved heavy use of a mask. He likes puns, masks, and large audiences.   www.neillaurenson.com  @NeilLaurenson