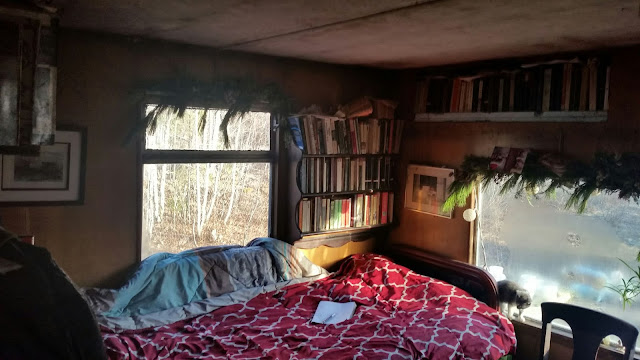 I live where time holds little value beyond night and day, the seasons, or the ebb and flow of the wilderness surrounding me. It has been here that has allowed me to freely write more than anything else. It is place that has facilitated a schedule full of leisure, where writing is a pursuit among many. So rather than a break down of a “typical” day, I will colour in where and how I am able to write daily, followed by a shade of my writing methods.

It is the fourth year of living in the woods with my partner and two teenaged kids. The closest village is seventeen kilometres away, the closest neighbour one. We live in a 1960ish, 10×24 foot mobile home. There is no running water, unless one counts the natural spring a couple of hundred feet away. We are off-grid; in the winter there is hardly electricity to charge phones, in the summer no one is inside to use electricity. The cell service is which ever way the wind blows and no highspeed internet is available. We heat with wood, and we grow/forage the majority of our food, plant and animal. We are also constructing a stone home using older building methods with local and found rock. Everything is either second-hand, homemade, or jimmy-rigged.

One would think that the lack of space and time would be prohibitive to writing, but honestly there is both in plenitude. As long as a small portion of everyday is given to essentials (ie. firewood, weeding, getting water, etc.), one has more leisure compared to typical employment and the outdoors is hardly claustrophobic. We are thriving on 90% less, than we did 4 years ago living in Toronto treading financial water with rent. We have no bills now, except for the phone, this was begrudgingly taken on, and a $60/year property tax. There is very little to compel one to reenter the economy once freedom has been tasted.

I use to work 50 hours a week, six days a week as a mason specialising in heritage restoration and stone carving. It was extremely physical work, and I would come home and pass out. I wrote nothing but a few scribbles here or there, maybe some marginalia in the single book I could finish each year. We were urban normal, eating out, going to sporting events or shows, this was how time was spent, further accruing red ink and dissatisfaction. At the time a semblance of self, social and environmental awareness would present in things like urban harvesting, guerrilla gardening, and owning contraband chickens. Chickens that became the catalyst for the extreme lifestyle change. Chickens and a fear (read lazy) of doing taxes. Now being that I live in Canada, when we filed our taxes after five years of evasion and all was settled, there were benifits that were unclaimed over those years. At the same time the city of Toronto had come and demanded we get rid of the chickens (ironically that neighbourhood is now allowed to own chickens). Our tax return was enough to buy literally  the cheapest 100 acres in the country, which is the Chipman area of New Brunswick, and a one way ticket to get there with only camping gear, family keepsakes, and books. There was nothing here but nature. We lived in a tent for over three months. Over the few years we've managed to scar around an acre for ourselves, the rest being left woods, ponds and bog. This is where I plan to live, a permanent outsider, until I die.

Of writing method then. My space is multipurpose, I write with a 2mm mechanical pencil and type/submit with my phone in a room that is bed/living/dining/kitchen. There is only one rule that I use, and that is that there must always be a rule to exaggerate, deflect, obscure, and/or defer the meaning. I am under the belief that if one is trying to describe the indescribable, then being unable to do so may infact achieve a better resemblance of this indescribable, or at least leave the text open enough for different readings. The rules are centered around metre, form, etc. and I keep on using a set of rules until points of resolution and dissolution are found, changing the rules as they begin to resonate or not. Reading is the backbone and often provides the moment of entry into a particular constellation of thoughts. I read more than I write, and writing is almost solely in response to what I am reading, positive or negative - I read almost as much of what I don’t agree with, as what I do and read books repetitively. Generally, I concern myself with philosophy, poetry, theatre, and history. I am always working on more then one project and reading multiple books, if I am not distracting myself with my other amature persuits like, painting, astronomy, collecting specimens to study or eat, or just staring at the sky or ceiling (weather permitting). My writing has affected my house building though. So currently I am attempting to merge intellectual activities with physical activities over the next building season in efforts to finish the one thing that is guarantied to out live me by generations - a stone house.

Russell Carisse (anarchist/poet/mason/pretender) lives with their family of people and animals in New Brunswick, Canada. They are preserving 100 acres of wood and wetlands, where they are building a handmade stone house, growing food, and scribbling. Russell’s debut collection of poetry, Nomography, is forthcoming Feb 2020. Freedom is a priori and Art need always be free.
at December 22, 2019