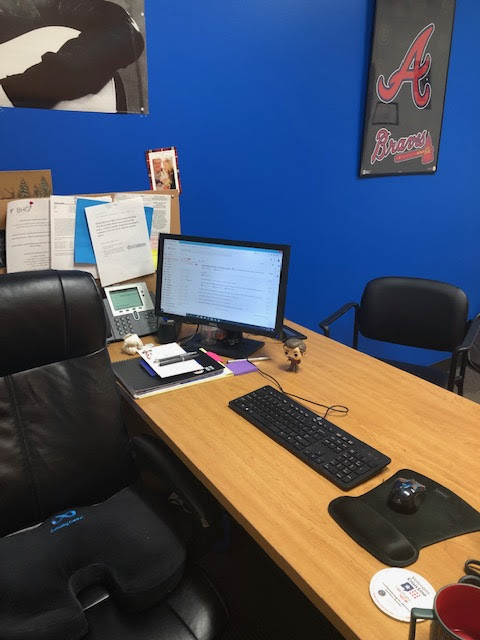 Briefly, How I Got Here In the First Place

When I started writing, back in 1987, I used my grandmother’s Singer sewing machine as a desk. The next year I asked for a typewriter and retired the pencils and spiral notebooks, affixing the Brother machine atop the Singer machine. I exclusively read Stephen King when I wasn’t writing. Work continued in earnest.

Today I don’t use a desk. I sit in my recliner with the laptop. At my job I do write at my desk when I find time to write at all. So there’s these two places I write. Here are recent random days from each.

Saturday morning. I should be cleaning the living room, doing something with the dishes before they come alive and trot out of the room into some storybook town where they are the collective monster in the woods. I should be getting ready for our Christmas tomorrow, a little early to accommodate schedules. Instead I have my sweater and jogging pants on, house shoes. Instead I’m in my recliner, the blue room with holes in the back and part of the armrest torn away. I’m side-watching a crime documentary on Amazon Prime, stealing a glance here and there when I get stuck on a particular sentence or thought. My laptop glows expectant in front of me.

The house is quiet. Heather is still asleep and a #2 sausage platter with a side of bacon from Tudor’s Biscuit World is heavy on my mind. But there’s Sister Hall to consider, the main character in my recent short story. And this morning General Hall, her dad, is on stage, too. I add to my stories by section. Each story is nearly always divided into sections and worked on separately in this way. When I’ve finished one part I hit the Cap Lock and type MORE HERE and then move to another section. Today I’m moving away from General Hall creating his oracle on Abner Mountain and revisiting a section less involved. My brain is slowing down, making way for my stomach.

To stave off hunger and maybe finish up another part I put on coffee by the cup, the new Keurig allowing for one cup at a time, which is good or I’d stand in the kitchen and drink one after another so as to procrastinate, to avoid the possibility of writing a bad section due to distraction.

It is at times such as this that the glamour of being a writer is stripped away. Don’t picture me in the midst of some impassioned moment of muse-infused glory, Shakespearean in my genius, awash in my perfect syntax and poise, sunlight beaming through on to my Victorian era writing desk, perhaps the scent of rotting apples wafting up from my desk drawer to conjure memory into fiction. Don’t do this; that’s a mistake in logical thinking.

I scratch the rat’s nest that makes up my right-sided, receding hair line. There no point putting it off any longer. I change into some more acceptable clothes, grab my Atlanta Braves cap, and head out.

After having breakfast, I return home. During that entire time away from the laptop I’m working on the story, though. It’s time that matters in the process. When I get back I start in pretty fast. I finish the day’s writing session with some background noise. The choice for the past few weeks has been a show called How the Universe Works. It’s perfect when I need those brief breaks to let my mind reset my imagination.

From this point the session winds down. I stop when it feels natural. I don’t push it, and I accept incompletion if that’s what’s called for at that moment. A lot of writing is acceptance and patience.

At the Job In Bursts Between Drug-Addicted Patients

It’s a bad morning. All of it, everything is bad. Life, writing, life. All terrible. I decide to do nothing on my job today. Instead I bring up the show Hannibal on my phone and settle in. From the time I woke this morning I’ve not thought once about writing.

I’ve let my guard down and had a thought of writing, of anything other than the horror that is my life this morning. Besides, I’m on the series finale of Hannibal and then there’s nothing left to distract me. So I write.

Short stories. Short stories. That’s where my heart rests. But I do have three or four books going. Novels, as it were. Projects that collapsed into some form other than a short story and which I couldn’t give up on. This is the part where I choose what I’m going to give my effort to today, since it assuredly will not be my job as a substance abuse counselor.

Still no idea what I’m writing on today, but I have floated around and researched a little on the Delphi Oracle for this current story. Research for me, for my writing, is ongoing. Truly, I research every waking minute. I never know what might come up in my filter while writing that would fit or make a story spin into a strange direction I hadn’t thought of or even anticipated. In a very real way, it’s the reverse of “garbage in, garbage out” for dreaming. It’s more “random details and facts in, important and interesting details and facts out.” That’s if I’m doing it right. To do it right I have to let go of trying. I let my mind wander where it will. It’s a trust exercise I’ve been fully engaged in for the past 34 years.

Lunch time. Early because we start earlier than most. The early start is due to having a lot of coal miners who are addicted to opioids following accidents that left them disabled and in chronic pain. But early, yes. So the lunch is early, too.

Like a lot of days, I skip lunch, but use the time reading. Today it’s Glenn Gould. No idea how I got to his Wikipedia, or the links that followed, but I did. And so I spent a couple hours on Glenn. I have no particular interest in classical music, but Gould’s eccentricities lure me his way. Difficult, genius, prodigy, mentally ill. It’s an interesting draw. Here’s what I know: I won’t write about Gould or anything to do with him today, but I will absolutely do so later. It could be months or years, but I will, and I will have researched today in preparation.

Wrote four or five pages on a book I’m working on called Evergreen. It’s structure is very loose and open and so when I’m lagging the option is always there. I used to call it my dumping novel, the place where I went to write when I couldn’t write. But it’s taking shape. Still, I feel my short stories are suffering neglect. Also in the back of my mind is the manuscript I sent to West Virginia University Press on November 1. Even though Derek Krissoff, the director there, told me it could be a bit before I received word back on this draft, I feel incomplete in some ways. I know there will be more drafting on that book and yet it feels like it was finished forever a month and a half ago. Sometimes books become ghosts in that way.

The benefit of coming in early to the job is that you also leave a little earlier than most. It’s quitting time. My next stop (an hour drive home) will be my recliner and the laptop again. Though it’s not very exciting, these are samples of my days, the two different kinds that I make fiction, poetry, and nonfiction in. And I don’t worry about that; masterpieces were made in the same spirit and circumstance.

Sheldon Lee Compton is a short story writer and novelist from Kentucky. He is the author of six books, most recently the novel Dysphoria (Cowboy Jamboree Press, 2019) and his third short story collection Absolute Invention (Secret History Books, 2019). He also believes baseball is our purest form of truth.