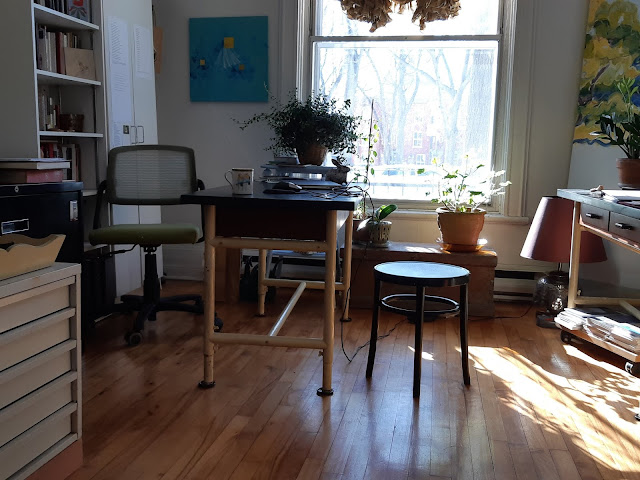 *my addition to the line

For most of my life I have been a visual artist and didn’t know that I had an undeveloped ‘muscle of poetry’ in me.  My writing days haven’t varied much from those in the studio.  I arrange blocks of consecutive days without any commitments or appointments.

I’m up around 8 a.m. and get to my desk, 9-ish.  I flip through emails, flag a few, check a few sites, skim/read a bit of The Guardian and look through an architectural design site.  The latter leftover from a different life.

I breakfast in the studio and make notes while I eat, small phrases, (I eat those too) reminders to change the title or the format or, or… notes are endless, not limited to breakfast or locale.  When I get around to it, I transcribe them to a running doc. They get stored by date and saved in folders by years.  Where is that bit about silver?  Ctrl+F — always a thrill.

The first bit in the morning is a sorting and deciding what, if anything, is calling to me. When I began writing poetry, I’d get so excited by getting something down that I wanted to show it to someone, immediately, at least by email.  I’m ever grateful to those practiced and patient poets who were on the receiving end of my enthusiasm.

I’ve learned to sit with a poem now, and can equate it with painting.  Some canvases are done in one sitting, most take many many sessions and some — years.

My main work time is spent revising; moving lines about, verifying that a word means what I think it means, researching to see if the bird really lives in the altitude of my poem, mountains, and (I’m speaking literally here) if it’s endangered.  I work, often overwork, the same two or three poems for several days, then leave them alone for a week or so, unless one of them calls out with a new line, a new slant.  Having let them rest, when I return it’s easier to see if I’ve written mere verse or if there’s potential for an actual poem.

What starts me off on a new poem is typically something I’ve seen. Something that lights up dots of connection to whatever I’ve been thinking about, for example; the disintegrating environment has had a significant place in both my painting and writing, particularly in relationship to birds.

I write in longhand on a thin lined paper attached to a clipboard.  I gather those handwritten beginnings into sheet protectors along with first drafts in Word.  For the present, my most satisfying poems are short ones. I think that after I’ve said what I wanted to say, or let the poem go where it wanted to go, what else could I add.  If I do write a long poem it often ends up reading as two separate pieces.

Times when I can’t get anything working, I look for possible homes for my poems.  Also, I keep a list of them and record where I’ve submitted each one, color coded — love Excel.

I get hungry around 2:00 at which point I can’t concentrate.   I find lunch, whatever’s there that doesn’t take any time, hopefully leftovers.  I actually hate leftovers, wish I could be a breatharian, not bother with the interruption.  But I eat and check messages.

I still haven’t spoken to anyone.  And, I work in silence.

I continue until around 4:00 then knock off to have a cup of tea with a neighbor.   If no one’s around for tea I read, poetry or about poetry, for an hour or so.  Maybe I’ll remember that the laundry I put in at breakfast has to go into the dryer.

As an artist, I needed a studio to do the type of work I did but even with a designated room full of a writer’s paraphernalia, I write everywhere.  The time frames aren’t regimented.  They expand and contract daily, seasonally.  I seldom work at night, but it has happened.  I rarely liked painting commissions and that’s carried over.  So far, I don’t enjoy writing poems on a theme.

Also carried over from my painting practice is the habit of never a day without a line.

Coincidentally I had a teacher tell me to just write lines.  It’s the equivalent of getting the paint on the canvas.  Made sense.  I wrote a poem about that.

Rose Maloukis is a poet and visual artist, with a BFA from Wayne State University, Detroit, Michigan. She was born and grew up in the United States but has dual citizenship and resides in Montreal.  Her poetry appears in a limited-edition bilingual artist’s book, From the Middle ~ Sonoritiés du Coeur, which is held in the collection of both the national and provincial libraries.  She was short-listed for the 2015 Montreal International Poetry Prize and two poems were published in Matrix Magazine, Issue #105. A winning Second Place poem has been published in Geist’s 2018 Spring Issue #108.  Her chapbook, Cloud Game with Plums is forthcoming from above/ground press.