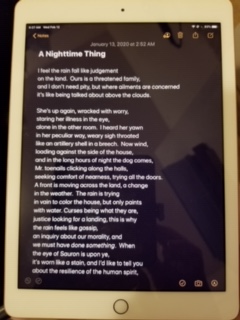 The closers are the place where a poem either makes it or it doesn’t.  You can have a clunker first line and great poem.  But you can’t have a great poem with a clunker closer.  Here are some recent favorite closers of mine:
From a poem containing aphasia.  “you’re reaching for a raindrop.  You get rain.”
From a poem with many moths:  “posing us like dolls, proud of their work.”
From a poem about a great love: “our sweetness, a thing nearly/ cloying, a soft shard of god broken/ off by a sadness over mortality, / its ink a watery piece of grief.”
And from a poem about nostalgias: “…where you bring/ your parts and leave things there, in the air, / a sort of mobile without strings.”
Unlike the closers, getting art done is about starting.   After all, you can’t get to those closers unless you sit down and begin.  Speaking of which, let’s be honest here: many a great poem is written on the commode, on the seat-of-ease.  And they don’t all start with “Here I sit, broken-hearted…”  Reading around this blog, one sees the constant tension between the day job and the work.  Between eating and arting.  People try to clear enough space to sit in their nicely shoe-horned-in office space.  The golden wooden shelves are filled and glow with sunlight.  The keyboard and screen are poised, calling.  Even in the photographs you can nearly smell the steam from the perfect cuppa.  We are artists, yes, whose means of production include space: personal, emotional, physical, aural space.  I have a space like that.  Haven’t sat there in years.
As for where I actually get my writing done?   My lighting isn’t:  I write in the dark of night.  Mostly.  I can address the standard anonymity of the coffee shops, and I’ve written some wonderful things there.  But almost all my initial drafts happen at night, alone in a dark room.
One of my writer pals says “I can only write at night, when I’m sure there’s no one else awake in North America.”  The subconscious is a beautiful thing, but it’s shy.  Mine wants the fences down and nobody else around.  At night the pressure of the social contract is minimal.  The phone don’t ring.  I’m strong about crap like email, social media, and anxiety.  My writing time is sacred space in every way.  The need for such isolation is what comes through.  Interruptions are assaults, are thievery.  We try to cobble together blocks of unstructured time.  We fail at it an awful lot.  But at night? With an iPad?  Heaven.  I go to bed early, and by one or two a.m., I’ve had four or five hours. I’m fresh, so my best energy goes into what I feel is my most important job.  The rest of life I can do tired.  So, I draft for between one and three hours (yeah, sometimes I just manically quease my way into the day, and pay for it the next night), then I crash for another hour or two, and then I start my day.
See, I’m lucky: I can be stupid-tired at my day job.  I take care of buildings.   It can be physical, like construction or moving appliances.  Yes, it can take a little problem solving, but bringing my A-game?  It’s rarely crucial.  In college I washed dishes in a busy restaurant & bar.  They found out I had line-cook experience and offered me a job in the kitchen.  I said no thanks.  “Why not? You’ll get a raise.”  I declined, saying that they would pay me another fifteen cents an hour, yes, but I’d have to think.  Washing dishes, my time was my own.  It wasn’t worth the paltry raise to give them my mind in addition to my body.  You take my point: I reserve my best hours for my art.  My art appreciates it.  But there’s more to it.
I’m serious about this.  So serious, in fact, that I almost never send things out.  I’d rather put the time into drafting more poems.  This frustrates my closest writing pal, Lee Parpart.  She’s so good at taking the pulse of a magazine and offering it up.  She understands the publishing world, as she should, with a publicist and an editor’s insightful eye.  Not me: I’m a dope about publishing.  Serious means I used to carry a notebook with me everywhere I went.  Now of course, we have gadgets.  Voice memo, texts, audio, whatever: we can store it all in our back pockets and transcribe later.  At night, though, that was trouble.  First, you had to turn on the light.  Then get up on one elbow to write.  You’d wince about the lamplight.
Advance: the laptop.  But you had to get up, switch it on, balance it on your knees.
Advance: the iPad.  I don’t even get up.  I don’t switch on the lamp. I have it reverse-illuminated so the letters are white on a dark background.  Here’s a poem about that; not a great poem, but okay:

Writing in white on a black field
Feels like waking up to find yourself
the wife instead of the husband.

You go to a different armoire for words,
trot out the sundress you always liked on her
and throw it over your own head.

All writing is writing back.  And when
silence enters the house, in stealth, like an animal,
you hoard it, pieces of the dark that press

on your throat, congealing like a clot, the ink of terms
flooding a cut, scabbing over where otherwise
a new limb tries to rise to write in a light hand.

Dark meadows are always riven with mice trails,
whose grass tunnels link galaxies, where the otherwise
bright words are sheltering, hooded from the owled air.


With the tablet, you can even dictate into a notes file, voice-to-text.  But I don’t.  I use the touch-keyboard.  It’s slow, but so am I.  The pace gives me space.  I ruminate.  I check definitions by tapping on a word.  I have research at my fingertips.  Rabbit holes can yawn, yes, but, again, I’m disciplined.  Why so much discipline?  I’m getting older.  The first-sleep/second sleep thing serves me perfectly.  I tend not to be the sort of sot who goes to bed drunk, so I get my beauty rest, and pretty much plan on a couple of productive hours every night.  And if I miss a night? I feel like I missed a flight.  Yes, every now and then I’m up late for a good reason, and then I crash hard for six or eight straight hours and I miss my writing work-day.  But I don’t beat myself up about it.  I love going to bed early, because I know that the next thing I will do is wake up and write.
How, you might ask, does a long-married guy get away with this?  Simple: I am blessed with a light-sleeping spouse who blames me for what I do in my sleep (snore) and a few years ago she retreated to another room to sleep.  Which is fine with me, because she lets nature shows blare on her screen soporifically all night long.  So: I have the proverbial room of my own, and my muse visits on my schedule.  About the muse: my muse is not inspiration.  It’s audience.  I have someone I want to show my writing to.  My muse is Lee. We’ve known each other our entire writing lives. We send each other most of our drafts, and we are each other’s best readers, cheerleaders, editors and advisors.  There’s no one else whose writerly self I trust more.  In that sense that she’s my first reader and the one I want to run to as soon as I have something new. It’s a little like being the kid with an adoring parent. I’m pretty sure Lee doesn’t want to be seen as a parent to my being a child, but it is true that she is wildly enthusiastic about most things I write. Like a parent would be.  But she’s also death-on-a-stick when I write a clunker.  I trust her to tell me when something’s run off the rails. And she does.  She knows it’s my work and not my immortal soul, and that I’d rather have her paint the target on my darlings than to let the wrong ones live.
Back to starting:  if I start something and get a good idea, I’ll usually follow it through to some sort of completion.  There’s a common idea out there that when inspiration strikes, you have to answer it like a summons.  But I’ve learned to just get some notes on the direction it’s going, and I can come back to it, even days or weeks later.  And I have a whole separate ideas file that I’ll throw things into, and then, when I’m up in the middle of the night and I feel like I want to write, but I just can’t get started, I’ll scroll through the idea bank and just pick something to work on.  Another good block-breaker is writing in a form.  Sonnet, sestina, ballad measure, whatever.  It’s distracting enough to allow the brain to break through the block. So what can I leave you with?  Decide what’s most important to you (writing poems) and arrange your life so that it gets your best hours.  Clearing the decks, finishing some work so that what’s left is good enough to write in?  Foolishness.  Give your best, freshest mind to your art.  It starts like this: Good-night.

David Epstein lives in central Connecticut.  He is married, with three children, at least one of whom writes poems too. David takes care of old buildings for a living, and spends summers sailing in Woods Hole, Massachusetts. He is radically underpublished and doesn’t mind it very much.