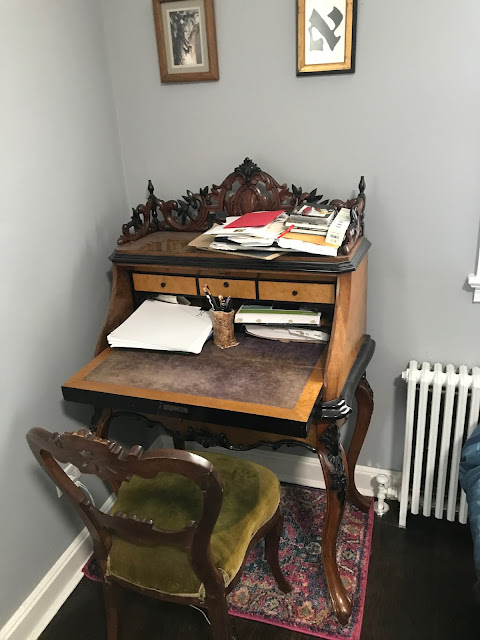 I don’t write every day, but I’m thinking about writing constantly. I think about the poem for months, or even years. I think especially about the form, and trying to find which form fits with whatever subject I want to write about.

Writing poetry is also about developing the awareness of when poems happen, so you can be there to “translate” them into English from the mother language. Writing is above all the psychological struggle inside the writer to infuse inert and static objects, words, with energy. Summoning that energy is key.

Poetry is not like songwriting or music or theater. In those mediums, language’s counterpoint is music, other musicians, or actors. In a poem the only counterpoint is silence. Silence is part of the expression.

Poetry gets harder to do the longer you do it. It’s not like other things; driving or cooking or gardening, for example. Because both master and beginner writers are confronted with the same problem: filling a blank page with something. But the advanced writer can’t repeat herself and is held back by the continual loss of the dream when she was 17.

My writing day is choosing the become the person who becomes the writer. It’s not just about having the right education or technical facility with language. It’s not a specific repertoire or fulfilling of a set of expectations. It’s a way of living, a way of moving through the world.

Sean Singer is the author of Discography (Yale University Press, 2002), winner of the Yale Series of Younger Poets Prize, and the Norma Farber First Book Award from the Poetry Society of America and a Fellowship from the National Endowment  for the Arts; Honey & Smoke (Eyewear Publishing, 2015); and Today in the Taxi (Tupelo Press, forthcoming; and two chapbooks, Passport (Beard of Bees Press, 2007) and Keep Right on Playing Through the Mirror Over the Water (Beard of Bees Press, 2010). He runs a manuscript consultation service at www.seansingerpoetry.com