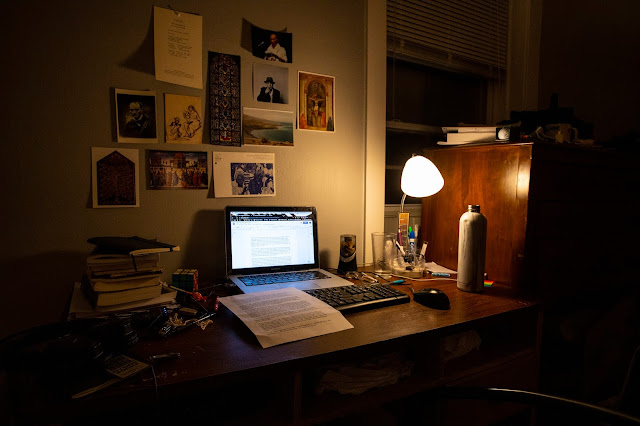 I spend a lot of time thinking about the end of the world. I wake up, shuffle to the kitchen, spoon coffee grounds into a filter, and, while the machine gurgles, think how our ongoing apocalypse is beginning to mirror what the prophets envisioned. The surrealistic Johannine revelation of flaming skies in wildfires up and down the west coast. Boshean rapture in the streets in Portland. How to square these images with the whimper of our year, the boredom of quarantine? There’s no visionary parallel for the more mundane plagues: income inequity, mild winters, and bullish oil futures.

A couple years ago, I stood in the Sistine Chapel and gawked at the self-portrait Michelangelo snuck into his Last Judgement. In a gesture akin to flagellation, the Florentine grafted his own visage onto the flayed skin of Saint Bartholomew. What was he thinking about as he brushed his face onto a boneless body that dangles from the saint’s hand like a saddle from a peg? Sometimes, I think of my days as a series of these amorphous human shells, hung on some infinitely receding department store rack, a Target of the flesh.

My typical writing day consists of trying to reduce my body to complete transparency. I open my spiral notebook, click a pen, and, if I’m lucky, can see right through my hand as it scrawls across the page. The desire to slowly disintegrate may be the only constant that unifies my disparate attempts at writing something that constitutes a new form of breath, a new poem, itself a means of disintegration. In order to get there, I need to descend into language like a glass of tap water poured into Lake Michigan. The most terrible aspect of my poetics is that it’s a battle against my own intentions. The only way I know I’ve written something worthwhile is if it feels as though it were written by somebody else. The muses, God, the unconscious, call it what you want, to some degree--I do not know how to explain this feeling--I have not written anything.

Once, I had dinner with the late Slovenian poet Tomaž Šalamun. As a teenager, he wanted to be a conceptual artist. “Then one day,” he said, “poetry fell to me like stones from the sky.” Once, maybe twice a month, I wake to a loud crash and find a small mineral deposit steaming on my bedroom floor.

As you can see, I have trouble writing about writing. How do I write? I’m sitting in a chair behind a desk and looking at a screen. I’m drinking coffee. It’s morning. Some days I do this, some days I don’t. I teach English as a foreign language from the same chair. At night, I read. Right now, I’m reading The Death of Virgil by Hermann Broch, a book fundamentally concerned with question of language, whether it is adequate to describe the unfathomable plurality of the present, whether the multiplicity bound up in instants of time can be rendered comprehensible in words.

I do not think our language is adequate for this task. Tragically, this is why I write, and it is why I write what and how I write: form, content, and process.

Hermann Broch began writing The Death of Virgil in a concentration camp. He finished it in the United States. Currently, in the United States, there are people in concentration camps. Many of them are writing. I spend a lot of time thinking about the word “end,” the word “world.” The poet Kaveh Akbar asks us, “What does it mean to be a poet working in a language, a medium, a nation, that can produce this?”

Tommy O’Rourke lives and teaches in Chicago. His poetry has appeared in Hobart, Why nICHt?, and elsewhere. He is currently translating a book of poems by the German Expressionist poet Georg Heym. He tweets @tommy_orourk.