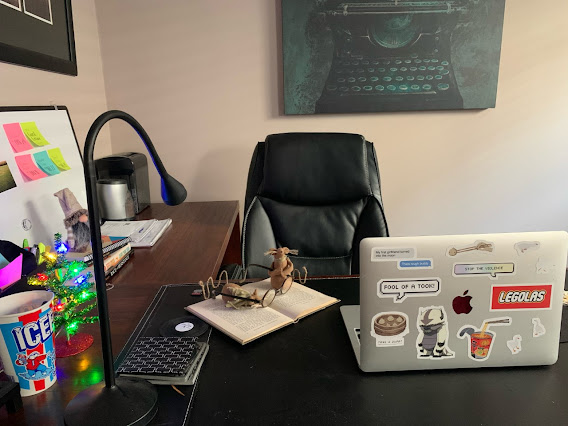 It takes me seven days to write about my typical writing day, which is very in character.

I’m currently doing a Master’s of English, which means that most of my time is spent reading and thinking about other people’s writing. On Tuesday afternoons I parse articles and essays to learn about methodology. On Wednesday mornings I think about climate fiction in comparisons: Henry David Thoreau and Jeff VanderMeer, Walt Whitman and Ben Lerner, Ralph Waldo Emerson and Tommy Pico. On Wednesday afternoons I struggle through theory. Between all that, I read everything from Kafka to Sally Rooney for a first-year course on narrative, attending two lectures per week and running a tutorial and pretending I know more about literature than my twenty-five students.

A typical writing day is school work, cooking, Netflix, and then an hour or so of actual writing around 11:00 p.m. 11:00 seems to be my magic hour¾it’s when I’m unfocused and tired enough to stop thinking and start typing. The stories that I’m excited about, the ones that I end up submitting, usually show up in one or two nights. They are few and far in-between.

This past month, I’ve been trying to NaNoWriMo my way through a short story collection, which has turned out to be the meanest thing I could’ve done to myself.

I’m a Bad Writer with barely any writing habits; I don’t do 200 words every morning, nor do I carry a notebook around for daily bursts of inspiration. I write when the spirit moves me, which is rarely. Writing 1667 words a day was never going to work.

But on a typical writing day, I’m always thinking about the next thing I’ll write, even if I don’t actually do it. I hear a song and the feeling gives me a scene or a character. I get sad about past relationships and wonder which parts I can mine for a story.

And if I don’t have a notebook, I at least have the Notes app. That’s how most of my bad poems happen (though they come far later than 11:00 p.m.).

When I manage to write, it’s usually in Microsoft Word, or Google Docs if I need a different space to type in. If I’m submitting for a contest or a magazine, I sometimes use the font they publish in to imagine my stories as successful. I’m a big fan of fonts, and a big believer that the right font will make the story come easier.

Sometimes I listen to a writing playlist I made which makes no sense. It includes: four songs from Hamilton (including “Nonstop,” which will make you feel bad if you don’t also write fifty-one essays in the span of six months); the slow-dance song from Enchanted; “Everything” by Michael Bublé.

I write at my desk, in bed, on the floor while my puppy runs circles around me. I write during class, sometimes, if I can manage not paying attention. I write when a book makes me jealous or in awe of its prose. I write when incredibly upset or bored, when I should be doing something else, when a 2000s sitcom is streaming white noise in the background.

I write when I can, and sometimes when I’d rather not. I write until I’m too tired to see the words properly or understand what they mean. I fall asleep thinking of character names and how to say that one thing better and what word count I was supposed to hit that day.

And then the next day begins.

Ryanne Kap is a Chinese-Canadian writer from Strathroy, Ontario. Her work has been featured in Grain Magazine, Ricepaper Magazine, Watch Your Head, Feelszine, Scarborough Fair, and The Unpublished City Volume II. In 2020, her short story “Heat” won first place in Grain Magazine’s Short Grain contest. Ryanne studied English and creative writing at the University of Toronto Scarborough and is currently pursuing an MA in English at Western University.