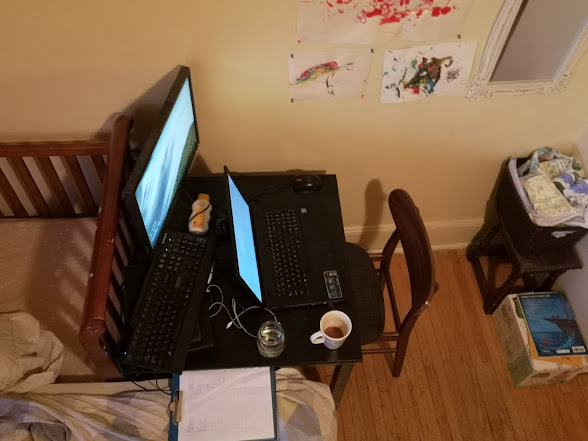 I write on weekends now. I used to write weekdays—I’d drop my oldest kid off at daycare and go into my office (a former cold storage room under an antique shop) to write from 9:30 until 2:30. With the pandemic my kids are at home, so I don’t have weekdays, or the office, anymore.

My workday starts when my kids wake me up. This could be anytime between 7:30 and 9. Earlier is better because then I can get more writing done, but later is not bad because I’ve been terminally behind on sleep for eight months. An extra half hour goes a long way. Once the kids are up and the coffee on, I head into my new office, which is also the bedroom.

My partner works a 9-5 job from home, so the “office” is mostly hers. Her computer set-up takes up the small desk at the foot of our youngest child’s crib. I push her laptop, keyboard, and second monitor to the back of the desk and put my laptop in front of it. There’s just enough room for a chair between the desk and side table stacked with diapers. I put my notebooks on the bed and my coffee on the small sliver of available desk. It’s crowded.

I haven’t had a regular enough schedule to commit to freelance writing since the pandemic started, so I’ve just been working on my novel. It’s nice to have just one thing to worry about, but it’s slow going. In March I was three months away from finishing; now, with my pandemic-adjusted writing schedule, I’m probably three months away from finishing. Eight months of cramming writing into any spare moment and I’ve managed to get to the point I started. I try not to think about that too much.

Half an hour into my workday, my four-year-old knocks on the door. He likes to deliver my breakfast. Work is interrupted a few times a day—my partner comes in to get clothes, the kids come in to say hello or show me a screwdriver or pull out the yoga mat for reasons I can’t make sense of. It’s nice to see them, of course, but it does break concentration. Even with the interruptions, mornings are my more productive time—usually I can get in three hours of steady(ish) work.

At noon, I come out for lunch and then the youngest naps, so I have to clear out of the bedroom. I watch a Sesame Street with the four-year-old and then build a model train town with him. At 2:00, I start to get antsy about getting back to work. Our youngest’s naps can be as short as an hour or as long a three and a half. If he naps long, my afternoon’s work is shot. Today, he wakes at 2:30.

My afternoon work is usually more disjointed. I write for an hour, and then edit, answer email, and look at Twitter. I try not to beat myself up about the latter. Social medial seems like a waste of my little writing time, but it’s the only connection I have with anyone outside my house right now. It’s important to read what other people are writing and participate in the writing community in small ways.

I finish at five. Today was a decent day, I revised 3,000 words of my 65,000-word novel. Normally, that would feel like a good amount—it’s a pace that would have me finish this draft in a month. But working only two days a week it will take me ten weeks. I plan to do more after the kids’ bath/story/bedtime, but it’s nine by the time they’re asleep and I don’t have it in me. I feel guilty, but I know the feeling of being behind won’t go away if I cram another half hour of writing in at night. So, instead of turning my computer on, I grab a book and relax as much as I can.

Michael Melgaard is the author of the short story collection Pallbearing. His stories have appeared in Best Canadian Stories 2020, Bad Nudes, and Joyland. He lives in Toronto.