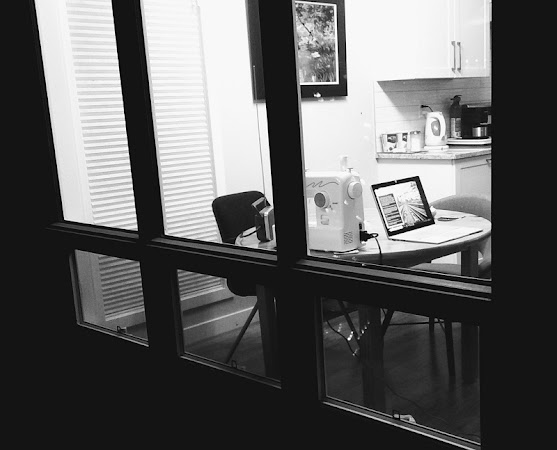 7:00 Up. Remember who I am. Gradually become human.

7:30 Laptop open. Set a timer. Eat porridge made by my spouse, side by side, each of us in a separate mental universe, two planets revolving around the same sun. Read the news. Watch the magpies magpie-ing, especially Lil Squeaky. Check on my poems—imagine someone my size and shape tut-tutting over an array of plants, except instead of plants there are poems, on screen, each in their own wee box—seeing if they are doing okay after last night's pruning. Plucking a wilting word here, watering a dry patch there. Curses when the timer goes off. Grab coffee. Run to the home office!

10:30-10:45 Another pass at the poems—mostly grooming. Browse a few journals on Twitter. Open one and read some poems. Post about any poems that I like. Be sure to link in the poet—let people know they write good shit.

12:30-1:00 Lunch, outside if possible. Think about writing a poem in my head. Make a few notes when I come inside.

5:00-6:00 Prep and eat a supper that is a rotation of the same 7 meals every 7 days. Listen to the escalating Alberta covid case numbers. Bewail the lack of political leadership for the common good.

6:00-7:00 Do something—row the rower while imagining I'm out on Conception Bay, play a video game (wandering the wasteland with a tire iron clears the cobwebs), have an involved discussion with my spouse about things techie, sew a 3 ply face mask made out of old shirts, haul the bins to the curb, read whatever rests at hand.

7:00-7:10 Think about having a beer, dissuade myself, open fridge and stare at beer, think about the way kindness and caring is losing ground to assholery and callousness, close fridge, stand firm.

7:10-9:00 Sit down at the laptop. Open up CherryTree. Maybe pull out my notes and write a new poem. Maybe do a re-write on a few poems. I keep dozens of branching versions of my poems. I like to follow impulses to their end then start over in a different direction, sometimes abandoning a branch after hours of input, sometimes picking up my original version and deciding it really was the best. Maybe checkout the Discover area of Submittable to see which journals are accepting submissions. Maybe check out the Twitterverse and see what the poets and journals I follow are broadcasting. Maybe pick one and curate a submission, and tumble down a rabbit hole remaking a poem I thought was done. Maybe let my mind wander over all the days events. Touching each like a shell found on a beach. Turning it over and over. Till a kernel emerges that I tackle as a new poem.

9:00-10:30 Watch Netflix or CBC Gem. Maybe some Quebecois music video channel. Nothing too serious. Think about calling family, abandon thought as its always too late out east. Crochet or tat a motif.

10:30-11:30 Read something written deliciously. Something where every sentence requires you to roll around in it. After some rolling—fall asleep.

Ren Pike grew up in Newfoundland. Through sheer luck, she was born into a family who understood the exceptional value of a library card. Her poetry has appeared in Train, NDQ, IceFloe Press, and Juniper. When she is not writing, she wrangles data for non-profit organizations in Calgary, Canada. http://rpike.mm.st/  | Twitter: @sputta