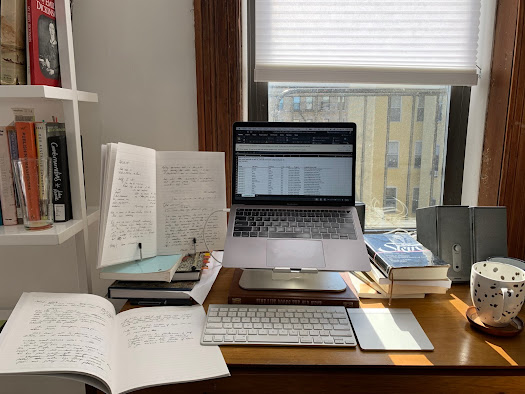 About a year ago I placed my writing desk in front of a window. Only last week did I finally clear away a monitor to open up the view. I fantasized this would open up new prospects in writing, force a confrontation with the real (whatever that may be).
Today, square in my vision is a person shoveling snow, digging out a blue Volvo from yesterday’s nor’easter. I fixate on the shovel’s blade and handle. They are school-bus yellow, a cheering color in a field of white and gray. The shoveler is exhausted, wants to give up. Finally he does and scrambles over a snowbank to reach the curb.
Could this be a parable for today’s writing? No parables, please. No, really.

*
This week I’ve been reworking a set of conversations with the architect Wesley Macedo. I’m folding them into a dossier of site writings about landscape and queer spaces, mostly in Brazil. Today I wrote up notes on our talk about mid-century São Paulo architecture. The passage in the conversation I keep circling isn’t about history, though. It’s just a dollop of language, accidental poetry found in translation. (My halting Portuguese means Wesley and I speak in English—the privilege of ignorance—so the translation is his.) I ask if there’s a chance we might be allowed to visit a famous mural by the designer Roberto Burle Marx, tucked away in a private building.
“Maybe,” he says. “But really maybe.”
I like how Wesley almost sings the words in the original recording, which echo in my head as I read. He pulls on the word really like it’s a trombone slide.
The poetry of the phrasing lies in the errant—queer?—way he bends maybe into a position it doesn’t usually assume. The phrase contains a paradoxical magnetism, cousin words that point in different directions. Really is emphatic. It amplifies. Maybe, two verbs wedded into adverb, keeps possibility open, with more than a pinch of doubt. It apologizes for the bossiness of its partner. Maybe… is a way of suspending decision, the ghost of a possible yes that in retrospect turns no.
The more I worry the phrase, I wonder if it doesn’t capture a relation to my writing: a will-to-claim followed by equivocation. Really tries to convince, to make you see it my way. Maybe backs down, acknowledges other points of view. Or maybe I’ve just worried the phrase to death, and it’s humoring me with meaning so I’ll leave it alone.

*
Lyn Hejinian traces her origins as a poet to the pleasures found in the materials of writing: the kinetic typewriter, the smudgy letterpress. A few months ago, I broke with the computer and started to write longhand in notebooks. To recapture the thrill of ink, I bought a cheap yellow fountain pen—a happy shade, same as the shovel.
Because my handwriting is almost illegible, I’m temporarily freed from quality control. I can’t rescan what I’ve written with a cold editor’s eye. I let myself skate. (Full disclosure: this diary I’ve written on a computer, which means I’ve fussed words relentlessly.)
In my zeal to organize, I’ve invented a system of notebooks. Rather than a diary of my writing day, I give you its spatial coordinates, color-coded:

-          A pewter-gray notebook contains process notes. Meta-reflections kept intruding into the text of whatever I wrote. Very Ashbery, but it was becoming a manner or a bad habit. This notebook is a sandbox where unruly thoughts can play.

-          A mango notebook for the dossier of site writings mentioned above. A full draft of the project lives on my computer—oh so many drafts—but it’s helpful to have a separate place to sketch new excursions.

-          A Muji notebook to record novels I’ve read as I study the form. I just finished Gerald Murnane’s The Plains and Christina Rivera Garza’s The Taiga Syndrome. Yesterday I started Muriel Rukeyser’s Savage Coast, published posthumously by CUNY’s The Feminist Press. (Her collected poems is also nearby.) Next up is Allison Cobb’s Plastic: An Autobiography and Jenny Erpenbeck’s Not a Novel. At bedtime, I’ve been slowly working through Thomas Mann’s Buddenbrooks, a gift. I read a chapter every night and expect I’ll still be plowing through it in March. Diarmuid Hester’s excellent Wrong: A Critical Biography of Dennis Cooper has inspired me to reread Cooper’s sneaky novel Sluts, which I alternate with Mann for a darker bedtime story.

-          The last notebook features bank-ledger smooth paper, Japanese in origin, that is an almost obscene pleasure to put pen on. It’s for a fiction project I’m developing. I began it in Scrivener, which led to fragmentation. Writing longhand has given me at least the illusion of forward momentum. Now it’s time to review what’s there and see if anything is worth rescuing.

Christopher Schmidt is a poet, critic, and Professor of English and Liberal Studies at City University of New York, LaGuardia CC and CUNY Graduate Center. He is the author of The Next in Line (poems), Thermae (poetry chapbook), and The Poetics of Waste: Queer Excess in Stein, Ashbery, Schuyler, and Goldsmith (criticism). Recent work has appeared in Fence, Denver Quarterly, Contemporary Literature, and Bookforum. An essay on Brazilian landscape in Elizabeth Bishop and Roberto Burle Marx is forthcoming at Modernism/modernity.