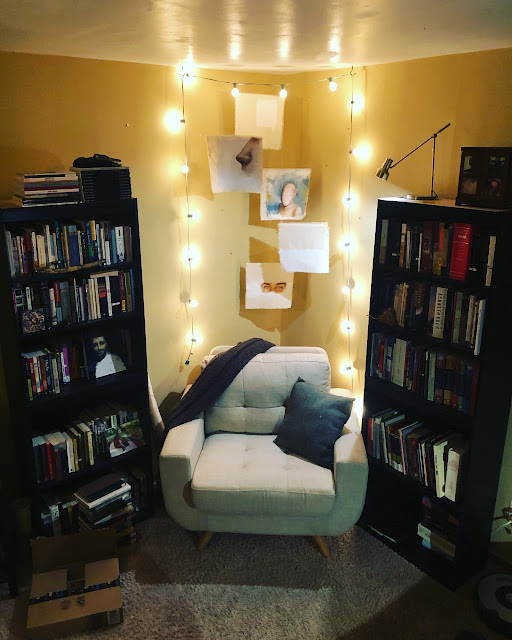 I don’t have a typical writing day, though some things have become certain during the pandemic: my partner and I got to sleep late—late, late. We spend the last hours of the day, midnight to four a.m., alone. He watches TV. I’ve already watched TV. We watched it together. I had to stop. I’m looking for addictions, better addictions, new addictions. I’m disgusting to myself again. It’s 2010 in my mind and I’m spiraling. It’s 7 p.m., which means we’re watching a movie over dinner. It’s 10, we’re on Netflix. It’s 3 a.m. and I haven’t seen anything new in months now, and the treasure trove of memory and imagination seems someone else’s lifetime away from my present, given I’m bored, bored and irresponsible, bored and without any sense of purpose. And I can’t walk anywhere other than the neighborhood. And the last time I walked the neighborhood a man on a bicycle crossed my path with his sleeping mat, backpack, and Slab City hair. He wondered about the walking path. Is this half for cars? This half for walking? Fuck if I know, I said. And: have a good day. And: six feet, please. Where’s my mask. And a time before that, when my partner and I went walking, we were approached by a man dripping blood down his face. He asked to use a phone. Six feet, we said. Six feet. We disgust ourselves—no, I. I’m disgusted. We didn’t see the blood until we’d started to walk away. It was bright outside. So bright it was blinding. There’s a trend I’ve tried to make into a poem, I think. It’s a mockingbird. He lives beneath a lamp on the church-turned-daycare across the street. He thinks it’s day when it isn’t. Like us. He sings the sounds he hears. Like us. He’s singing sirens. Last year—or, I think it was last year—I took a walk every day for six weeks. Early in the morning till noon. I listened to someone read Stanley Lombardo’s Homers. Susan Sarandon did the arguments. An instrumentalist made the similes special, sparkly. Around a lake. I did a lot of walking then, around a lake, and my mind worked, too. It brought words together, found images. We had images then. I woke up this morning and again the impossibly terrible had happened. It happened every day of this disease. It’s still happening. Tomorrow someone will tell me red will be next year’s color for the sky—thanks to politics, politics and the bottom line. I’ll believe them. We’ll all believe them, and by the time the sky is red, we’ll know that it’s too late. That it was when we first heard about red. It already is too late. My typical writing day is I need images.

Zach Linge’s poems appear recently in New England Review, Poetry, and elsewhere. Linge lives and teaches in Tallahassee, where they serve as Editor of the Southeast Review.